2012 (2009) Review of the movie 2012. A frustrated writer struggles to keep his family alive when a series of global catastrophes threatens to annihilate mankind.

A frustrated writer struggles to keep his family alive when a series of global catastrophes threatens to annihilate mankind.

Dr. Adrian Helmsley, part of a worldwide geophysical team investigating the effect on the earth of radiation from unprecedented solar storms, learns that the earth’s core is heating up.

He warns U.S. President Thomas Wilson that the crust of the earth is becoming unstable and that without proper preparations for saving a fraction of the world’s population, the entire race is doomed.

Meanwhile, writer Jackson Curtis stumbles on the same information. While the world’s leaders race to build “arks” to escape the impending cataclysm, Curtis struggles to find a way to save his family.

Volcanic eruptions and earthquakes of unprecedented strength wreak havoc around the world. 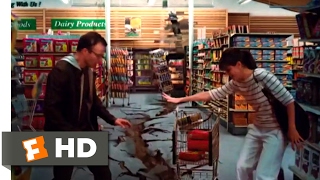 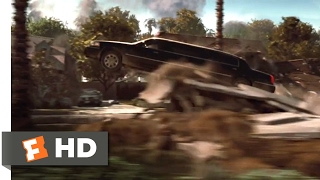 Do Not Panic: Jackson (John Cusack) picks his family up in his limo while a massive earthquake starts destroying Los Angeles 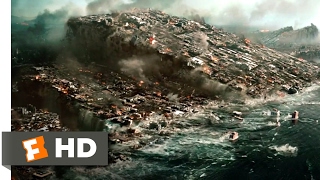 As Los Angeles crumbles beneath them, Jackson (John Cusack) and his family try to escape the city by plane 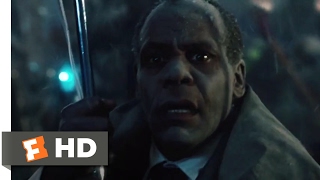 Check the censor’s rating in your region.

Rated PG-13 for intense disaster sequences and some language

2009, Adrian Helmsley (Chiwetel Ejiofor), an American geologist, visits astrophysicist Dr. Satnam Tsurutani (Jimi Mistry) in India and learns that neutrinos from a massive solar flare are causing the temperature of the Earth’s core to increase rapidly. Adrian gives a report on this to White House Chief of Staff Carl Anheuser (Oliver Platt) who ends up taking Adrian to meet the President of the United States.

In 2010, President Thomas Wilson (Danny Glover) and other international leaders begin a secret project to ensure humanity’s survival. Approximately 400,000 people are chosen to board arks that are constructed at Cho Ming, Tibet, in the Himalayas. At the same time as the People’s Liberation Army are gathering volunteers, a Buddhist monk named Nima (Osric Chau) is evacuated while his brother Tenzin (Chin Han) joins the workers in the Ark project. Additional funding for the project is raised by selling tickets to the private sector for one billion euros per person.

By 2011, humanity’s valuable treasures are moved to the Himalayas under the guise of protecting them from terrorist attacks with the help of art expert and First Daughter Dr. Laura Wilson (Thandie Newton). Her boss, Roland Picard (Patrick Bauchau) is later killed when he car is forced into a fatal auto accident in the same underpass where Princess Diana was killed.

Charlie, a conspiracy theorist, plays a video of Charles Hapgood’s theory that polar shifts and the Mesoamerican Long Count Calendar predict that the 2012 phenomenon will occur. He has a map of the ark project in addition to information about officials and scientists from around the world who were murdered after planning to alert the public. The family returns home as seismic activity vastly increases along the west coast of the United States. Jackson grows suspicious and rents a plane to rescue his family.

He collects his family and Gordon as the Earth crust displacement begins, and they narrowly escape Los Angeles as the city slips into the Pacific Ocean. As millions die in catastrophic earthquakes worldwide, the group flies to Yellowstone to retrieve Charlie’s map, escaping as the Yellowstone Caldera erupts. Charlie stays behind to broadcast the eruption and is killed in the blast of the expulsion of an ash cloud. Learning that the arks are in China, the group lands in a devastated Las Vegas to find a larger plane.

They meet Yuri, his twin sons Alec and Oleg (played by Alexandre and Philippe Haussmann), girlfriend Tamara (Beatrice Rosen) and pilot Sasha (Johann Urb). The group secures an Antonov An-225 aircraft (erroneously and perhaps deliberately marked an Antonov 500) and they depart for China. Also heading for the arks aboard Air Force One are Anheuser, Helmsley and Laura Wilson.

President Wilson remains in Washington, D.C. to address the nation one last time. With the Vice President dead and the Speaker of the House missing, Anheuser assumes de facto leadership. President Wilson is later killed by a megatsunami that sends the aircraft carrier USS John F. Kennedy crashing into the White House.

Sasha and the group plan to land briefly at Hawaii to refuel, however, the island chain has been devastated by volcanic activity. Continuing on, Sasha fears they may run out of fuel before making it to mainland Asia. They discover that the seismic activity of the Earth’s surface has shifted the Chinese coast 1500 miles east and they are able to make a crash landing that kills Sasha.

The group is spotted by the People’s Liberation Army. Yuri and his sons, possessing tickets, are taken to the arks, leaving Tamara and the others behind. They are picked up by Nima and are taken to the arks with his grandparents (Lisa Lu and Chang Tseng). They stow away on the ark with the help of Tenzin. As a megatsunami approaches the site, an impact driver becomes lodged between the gears of the ark’s hydraulics chamber, preventing a boarding gate from closing and rendering the ship unable to start its engines. In the ensuing chaos, Yuri, Gordon and Tamara are killed, Tenzin is wounded, and the ark is set adrift.

Just before he dies, Yuri is able hoist both his sons up to crew members of the ship; in doing so, he jumps to his death. Jackson and Noah dislodge the impact driver and the crew regains control of the ark before it can impact Mount Everest. After flood waters from the tsunamis recede, the arks travel to the Cape of Good Hope in South Africa where the Drakensberg Mountains have risen in relation to sea level and become the tallest mountain range on Earth.